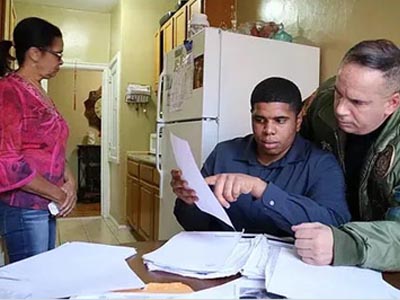 Held for nearly three years on Rikers Island, 24-year-old Bronx man Brian Solano was set to go to trial on Monday on charges of second-degree murder in the December 2014 shooting death of Willie Lora. Lora was slain in the Bronx’s Mount Eden section and the trial of his alleged killer, Solano, was moved from Monday to June 25 because of a prosecutor’s medical issue. The case against Solano involves multiple allegations of prosecutor and police misconduct, including a videotaped NYPD interview of an alternate suspect that wasn’t disclosed to the defense until two years after it was recorded.

Prosecutors with the Bronx district attorney’s office did not disclose video of a key 2015 NYPD interview until April 2017. But the video, in which another man, Justis Colon, told cops that he possessed the murder weapon, was leaked to Solano’s private investigator Manuel Gomez and provided exclusively to In Justice Today.

In the 2015 videotaped interview, two NYPD detectives interrogated Colon about a recent gun charge. He admitted to owning a black 9 mm gun for approximately eight to nine months prior to his arrest. Lora was murdered during this period, and ballistics tests conducted by the NYPD determined that Colon’s weapon, found about two miles from the crime scene in the Bronx, was indeed the one that was fired in the fatal shooting.

But prosecutors with the Bronx district attorney’s office did not formally offer to provide a copy of Colon’s videotaped interview to Solano’s defense counsel until a hearing on April 24, 2017 that was originally scheduled to be the start of his trial. Due process requires that disclosure of potentially exculpatory evidence material to guilt or innocence be made in sufficient time to permit the defendant to make effective use of that information at trial.

It is unclear whether the years-long delay occurred because police did not disclose the interview to the district attorney’s office or because prosecutors with the office did not disclose the footage to defense counsel. Thomas David Kapp, a former Bronx Assistant District Attorney who was initially assigned to the case, told In Justice Today that he has no recollection of the police interview, which was recorded on Jan. 10, 2015, just prior to when the ballistics report regarding Colon’s weapon was disclosed to the defense.

“I don’t think it’s anything intentional,” said Kapp. “I can’t explain … I don’t remember hearing about a statement being taken. It’s possible the police never brought it to us. It’s all about relaying information and sometimes information chains break down, though I’m not saying that happened in this case.”

John Schoeffel, a staff attorney with New York’s Legal Aid Society, says that the DA office’s intentions are immaterial to its constitutional obligations; the delay, he says, presents a potential Brady violation because prosecutors are required by law to proactively seek out any materials in the state’s possession that could be favorable to the defense.

“The U.S. Supreme Court has held that prosecutors have an affirmative duty to learn about all Brady information within the knowledge of law enforcement agents in the case, and then to disclose it to the defense,” Schoeffel said in an email to In Justice Today. “It’s not an excuse for a prosecutor to say ‘Only the police knew about this, I didn’t.’”

At the April 24, 2017 hearing, Assistant District Attorney Terry Gensler insisted that she told Solano’s defense attorney, Dawn Florio, about the interview “over the past couple of weeks.”

But at that same hearing, however, ADA Gensler requested that the defense be precluded from introducing evidence about Colon possessing the murder weapon at the time of the offense.

“The fact that this person indicated that he had had this gun during the time might mean many things,” Gensler told the court. “It could be a lie, it could be that he lent it to somebody else that lent it to the defendant, but it does not indicate that he was in fact there.” In her motion to exclude the issue of Colon’s gun, Gensler further argued that “gang members frequently share their weapons” and warned of a trial that would be “about the guilt or lack thereof of Justis Colon rather than Brian Solano.”

After the hearing, Solano’s private investigator Gomez interviewed Colon hundreds of miles from the Bronx at the Franklin Correctional Facility in Malone, New York. In a sworn affidavit provided to Gomez, Colon stated that a prosecutor with the Bronx district attorney’s office “tried to intimidate me and force me to switch my story that was on video to help the D.A [sic] win the case against Brian Sollano [sic] … I told her I’m not switching my story. She threatened me to link me to the case if I don’t help her out. I’m innocent I have nothing to do with that case. If I’m needed I will testify in court.”

At an Oct. 2, 2017 hearing, Gensler asked for and received a “cut slip” for Solano, authorizing his release but upholding his indictment. At the hearing, Gensler did not explain her rationale for requesting that Solano be freed, but did point to an unspecified subpoena meant to be served “on certain parties connected to the case.” Gomez says he believes that Gensler was referencing a subpoena “taped to his door” before Solano was actually discharged from prison. Solano’s attorney Florio, meanwhile, says that her client was freed because of prosecutors’ “witness problems.”

On October 24, the judge ruled that neither two police witnesses related to Colon’s gun case nor the NYPD’s 2015 interview of him could come in at trial. The judge said that in order to have allowed the videotape and the Colon-related witnesses into the trial, the defense would have had to demonstrate that Colon himself was the killer.

Soon afterward, Gomez says he handed over affidavits of two witnesses he interviewed who claimed detectives and prosecutors threatened them — and the case against Solano appeared to collapse. On November 6, Solano, who was just transferred to Downstate Correctional Facility in Fishkill, New York, was unexpectedly released. But the second-degree murder charges were not dropped and he still faces decades in prison.

“The CO came and he knocked on my cell, and he said pack up,” Solano told In Justice Today, “I thought they was playing a joke on me.” Solano walked out in his prison shirt and boots with just a Metro-North train ticket and $40 in hand.

Neither the Bronx district attorney’s office nor the NYPD have provided an official explanation for Solano’s release.

But just before Solano was freed, Gomez provided prosecutors with an affidavit from grand jury witness Noely Cistillo who claimed that an NYPD detective threatened that if she did not place herself at the crime scene, she would face 25 years to life in prison and only ever see her mother through a hole in the wall. “He was putting pressure on me to say that I was there, that I was involved, that I know who did it, when honestly I don’t know nothing about it,” Cistillo said in a Dec. 28, 2016 videotaped affidavit. “They kept telling me if I don’t tell the truth that I’m not going to see my mother…. And I just got scared, I was terrified. I didn’t know what to do, what to say, what to think.” Cistillo said she was held at the NYPD’s 44th Precinct in the Bronx for four to five hours while she was questioned; a few days later, she appeared before the grand jury where, she told Gomez in her affidavit, “they was putting words in my mouth.”

Another witness named Alondra Alba Villar told Gomez that she was pressured by an NYPD detective and an ADA with the Bronx district attorney’s office to falsely implicate Solano in the Lora homicide. “I kept telling the Detective I don’t know I was high and I couldn’t see the face,” Villar said in an April 20, 2017 affidavit. “[The detective] just kept harassing me, to try to accuse somebody that I did not see.” Villar added that an ADA told her that if she did not cooperate with the state, “they was going make it a ‘hard way’ — that they was going to put me through court.”

Both Villar and Cistillo said that arresting officer Carlos Faulkner of the Bronx’s 44th Precinct was involved in the attempts to coerce them to make false statements in the case. Detective Faulkner is already the subject of an internal affairs investigation for his role in a botched 2012 manslaughter case in which the defendant, Enger Javier, was held at Rikers Island for a year despite evidence pointing to a different man as the killer. Faulker allegedly said that he didn’t investigate other suspects in the case because “we got the right Spic,” referring to Javier. The NYPD did not respond to In Justice Today’s requests for comment regarding Faulkner.

“I just destroyed their entire case,” Gomez said of the affidavits he gave to Bronx prosecutors prior to Solano’s October 2017 release, “They realized they had no case.”

Solano’s saga is the latest in a series of cases in which prosecutors from the Bronx district attorney’s office and Bronx cops have been accused of misconduct. As In Justice Today recently reported, two witnesses in the murder case against Robert Collazo, including the state’s only identifying witness, claimed an ADA pressured them to change their stories. And in the Javier case, his attorney claimed testimony from a key witness was coerced.

Both the Collazo and Solano cases also illustrate the failure of the Bronx district attorney’s office to fulfill DA Darcel Clark’s promises to limit case transfers between ADAs and expedite prosecutions to limit the time that defendants are held pre-trial.

Solano, for example, has appeared in the Bronx County Hall of Justice 32 times since entering his not guilty plea in December 2014 and his case has been handled by three separate ADAs. “Every court date, it was always an adjournment,” Solano told In Justice Today. “The DA would say they’re not ready [for trial]. I’ve been saying I was ready to go to trial since day one.”

When asked for comment, a spokesperson for the Bronx district attorney’s office said, “The original ADA left the office, as did the ADA to whom the case was reassigned, that is why a third ADA is handling the case.”

“It was bad,” Solano says of his time at Rikers. “I went through a lot. I got cut on my face, behind my ears. The correction officers, [would say], ‘you’re a murderer,’ they were coming at me. Everything. ‘You going to do life, you never coming home.’”

More than three years after Lora’s murder, the judge in the case demanded that there be no further delays in the case. “I’m not going to embrace any excuses by either side on April 2nd,” Bronx Supreme Court Judge Steven Barrett said during a February 21 hearing. “The case is going to go to trial even if I have to do it myself without any attorneys.”

But when the trial was delayed again on April 2, Solano continued to insist on his innocence in the Lora murder and lamented, “the victim’s family still thinks I did it. So because of the DA, I’m in danger.”

The People’s P.I.
Scroll to top